Ten years ago, on October 20th, the Women’s singles final of the 2020 French Open tournament took place in Paris, France. Batteling for the championship – Polish player Iga Swiatek and American player Sofia Kenin, the latter being the champion of this year’s Australian Open. Swiatek entered the French Open unseeded (meaning she has not been ranked among the top 16 players by the competition’s organizers) with no WTA singles titles on her resume after turning pro last year. Two weeks later, the 19-year-old Polish player made history when she won the women’s final – not dropping one set throughout the tournament, being the only Polish player to win a Grand Slam singles title, and the lowest-ranked woman to ever win the French Open. So, what is there to know about this breakthrough star? 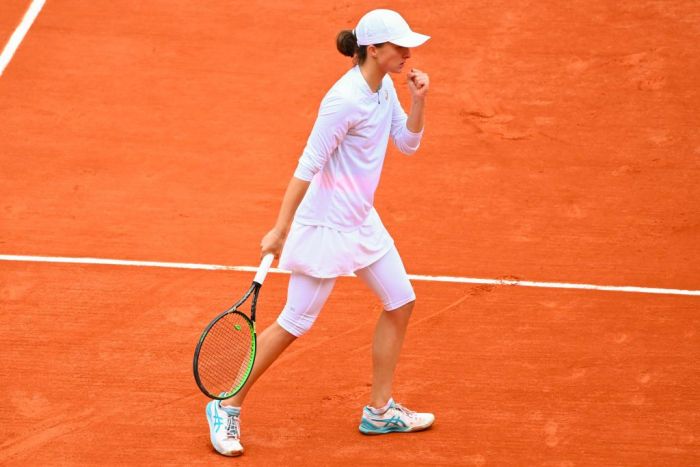 Iga Swiatek was born on 31 May 2001 in Warsaw to Dorota and Tomasz Swiatek. Her mother is an orthodontist, and her father is a former rower who competed in the men’s quadruple sculls event at the 1988 Seoul Olympics. Swiatek has one older sister named Agata. Swiatek’s father wanted his daughters to become competitive athletes and preferred they take up an individual sport rather than a team sport to have better control of their chances of success. Agata initially started as a swimmer but switched to tennis after she had issues with swimming. Swiatek followed her sister into tennis because she wanted to beat her, but also because she wanted to be more like her.

After winning several ITF circuits between 2016 to 2018, Swiatek won the Wimbledon junior title in 2018. Last year Swiatek made her Roland Garros debut, and while doing so, she was juggling schoolwork for her studies back in Poland – studies she only finished this year. Math is Swiatek’s favorite subject, and she has said it helps her game, allowing her to “see the geometry of the court.” A deep thinker, Swiatek employs a psychologist as a permanent part of her team – also a rare thing on tour.

“It’s crazy. Two years ago, I won a junior Grand Slam, and right now I’m here. It feels like such a short time,” Swiatek said on the court after her win at Roland Garros. “I’m just overwhelmed.” At just 19 years old, Swiatek’s future is entirely in front of her. The Polish star showed incredible poise and strength on the Grand Slam stage, starting with her win over 2019 French Open finalist Marketa Vondrousova in the first round. Swiatek then knocked off top-seeded Simona Halep in the fourth round and capped off her run by defeating Kenin. With Swiatek joining young stars like Naomi Osaka and Bianca Andreescu, as well as long-established superstars like Halep, Serena Williams, and Ashleigh Barty, women’s tennis is in great shape heading into the 2021 season.