2021’s award season had just started, and we can’t get enough! Having had spent a lot of time in sweatpants at home, having a sartorial escape in the form of red carpet fashion is especially welcome this year. So after the Golden Globes and the Critic’s Choice Awards – yesterday, the 2021 Grammy Awards took place. And, with music’s biggest night comes plenty of bold and daring style choices from the industry’s hottest talent. No event matches its mix of outré style and attention-grabbing outfits. One of the few occasions where a little black dress or simple tux just won’t cut it, its red carpet necessitates bold expressions of personality.

Airing yesterday (Sunday night), the 63rd Annual Grammy Awards were a long time coming, as they were originally supposed to take place in January before being postponed to March due to the pandemic – which means that the A-listers in attendance have had plenty of time to plan out their red carpet looks. So, without further ado, let’s dive in and review this year’s best-dressed celebs at the Grammys. 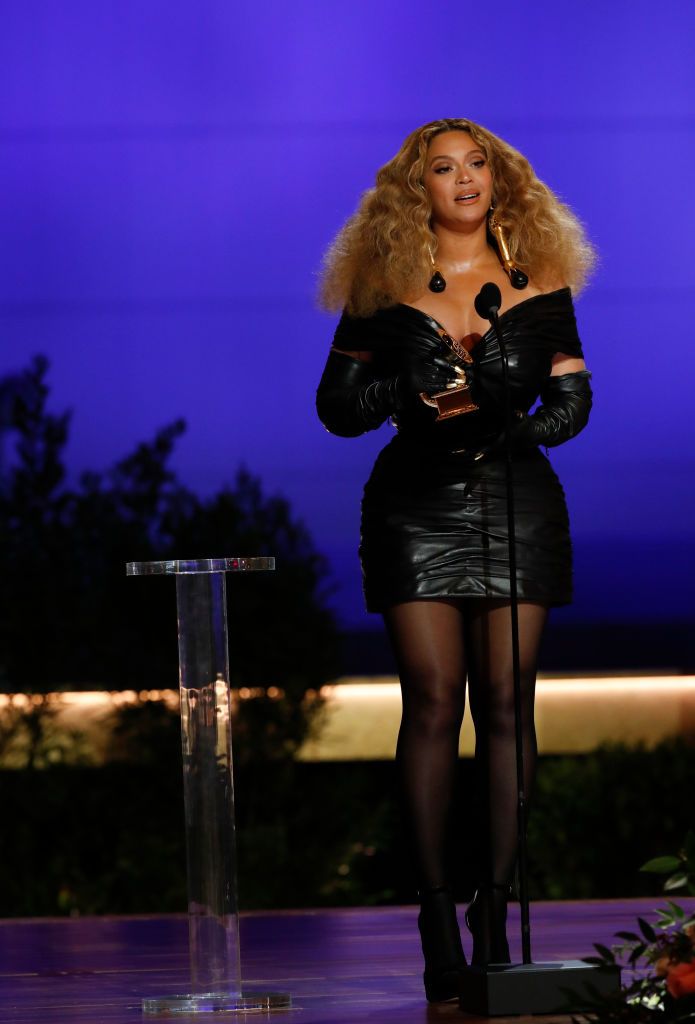 Beyoncé might not have performed on the 2021 Grammys stage, but make no mistake: She’s still the queen of the Grammys red carpet. After rumors that she might not appear at this year’s ceremony, Beyoncé showed up in a timeless black dress, which she wore with equally stunning earrings. Bey’s mini dress, a custom Schiaparelli creation designed by creative director Daniel Roseberry, features a plunging neckline, off-the-shoulder sleeves, and gathered leather. The singer completed her look with matching gloves and black heels, and long, gold earrings, also from Schiaparelli. Taking home 4 awards, Beyonce made history by becoming the artist with the most Grammys. Bow down to the Queen B. 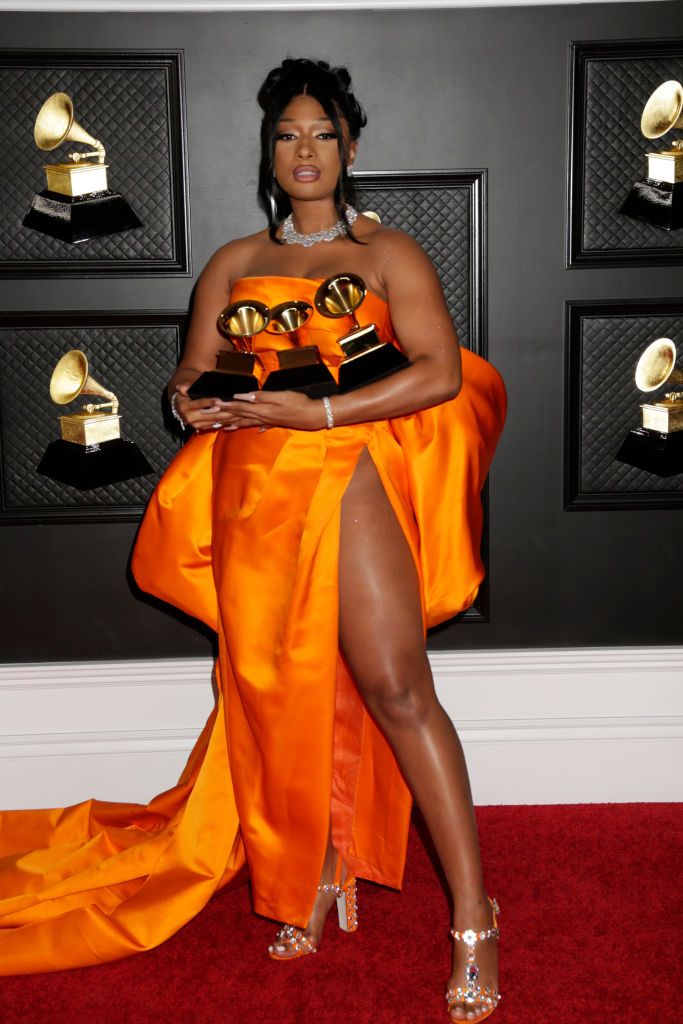 Megan Thee Stallion made a glamorous appearance at her Grammy’s debut. Serving old-style glam, the rapper hit the red carpet in a strapless neon orange Dolce & Gabbana gown belted above the waist featuring a thigh-high slit, dramatic train, and voluminous bow at the back. The ‘Best New Artist’ winner brought even more glamour to the high-fashion ensemble with over 220 carats of Chopard jewels, including a diamond necklace, large circular diamond studs, and sparkling diamond bracelets. Thee Stallion completed the look with a pair of gem embellished orange heels by Dolce & Gabbana. 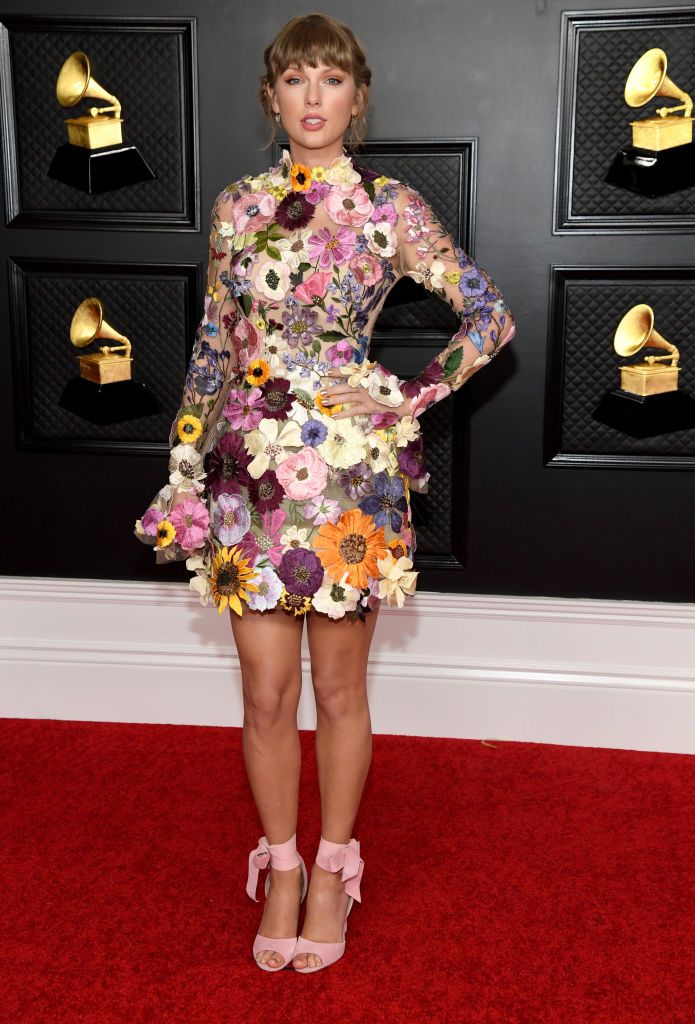 Another woman to make history yesterday is Taylor Swift, as she became the first female artist to win ‘Album of The Year’ three times. And Swift definitely wore an appropriate outfit for the historic occasion. Swift wore a floral mini dress from Oscar de la Renta with a pair of Louboutin heels and Cathy Waterman jewelry to walk the red carpet and accept her award. She also covered up with a stylish matching floral face mask when necessary. Designed with long bell sleeves and a mock neck, the fitted mini dress features a colorful array of eye-catching embroidered flowers that are reminiscent of spring.

Winning 3 Grammy Awards last year, Lizzo came back this year as a presenter, wearing a seafoam green look. Channeling the ’80s in her shimmery, strapless ruched dress by Balmain, Lizzo accessorized with matching heeled mules by Stuart Weitzman. The singer completed her look with jewels from Bulgari, including an assortment of rings, layered bracelets, an iconic serpenti necklace, and chandelier earrings. And if there wasn’t enough sparkle, she also wore glitter in her ultra-long locks. 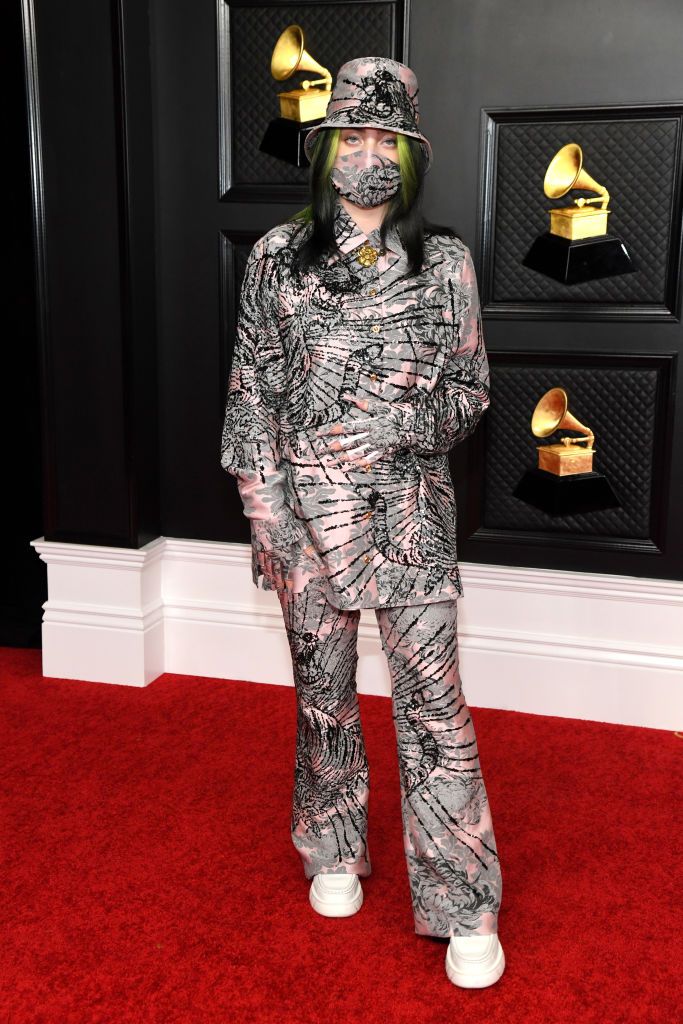 The two-year consecutive winner of the ‘Record of The Year’, Billie Eilish, hit the red carpet in a monochromatic floral look. The singer wore a Gucci ensemble, which included bell-bottomed pants and a matching button-up shirt. Eilish completed the outfit with coordinating gloves, face mask, and bucket hat detailed in the floral brocade design. Eilish paired the print look with white chunky loafers. Eilish’s outfit is definitely Everything We Want. 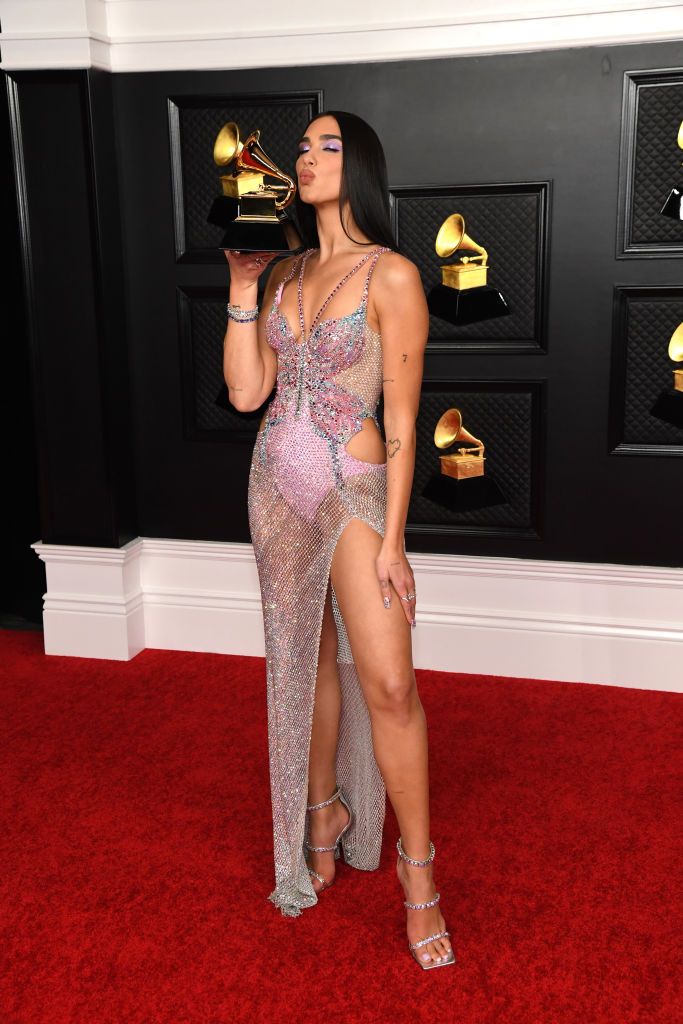 ‘Best Pop Vocal Album’ winner, Dua Lipa graced the Grammy Awards red carpet in an eye-catching Versace creation that was completely see-through and covered in crystals. Lipa’s gown featured an intricate, sparkling butterfly on the bodice, with its antennae joining the dress’s spaghetti straps to add to the rhinestone-encrusted neckline. The dress’s flowing, mesh-and-crystal skirt, which featured a super-high, thigh-grazing slit, covered a pink bikini-style lining. The singer completed her look with strappy high heels as well as ANANYA and Spinelli Kilcollin Delphinius rings. 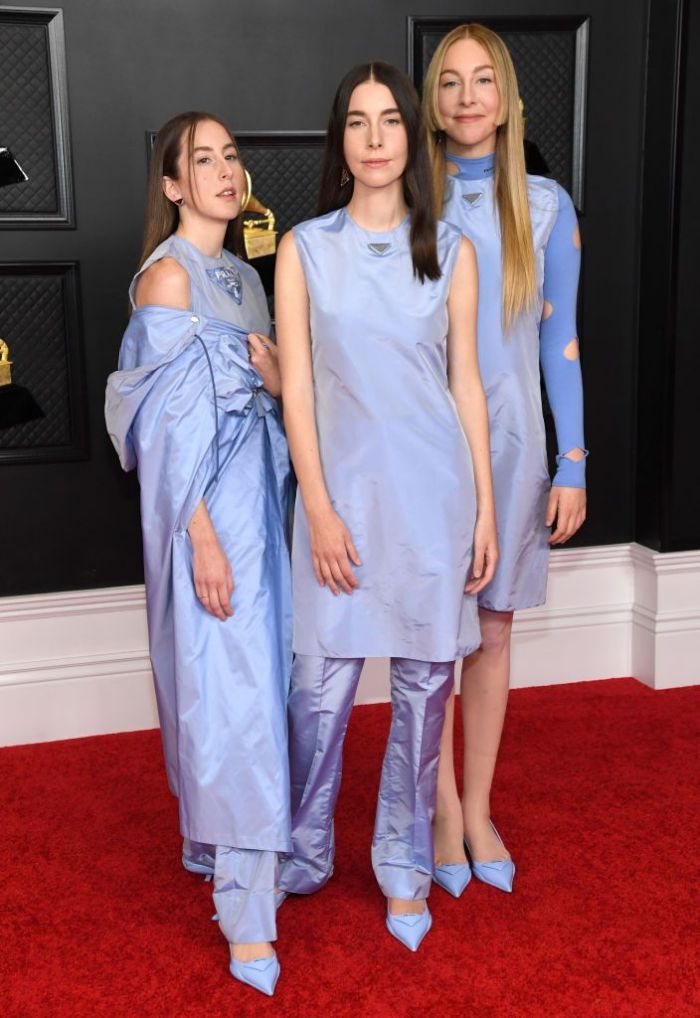 Sister band Haim, showed off their style at this year’s Grammys red carpet.

The trio walked the red carpet in periwinkle Prada ensembles, all of which featured the same sleeveless dress and pointed kitten heels. However, the outfits were all styled differently. Alana Haim wore a blue jacket draped over her dress and long pants underneath. Danielle Haim also wore pants but accessorized with larger triangle earrings than her younger sister. Este Haim arguably wore the most unique version of the outfit, with a high-neck shirt covered in cutouts underneath her dress, and was the only one not wearing pants. 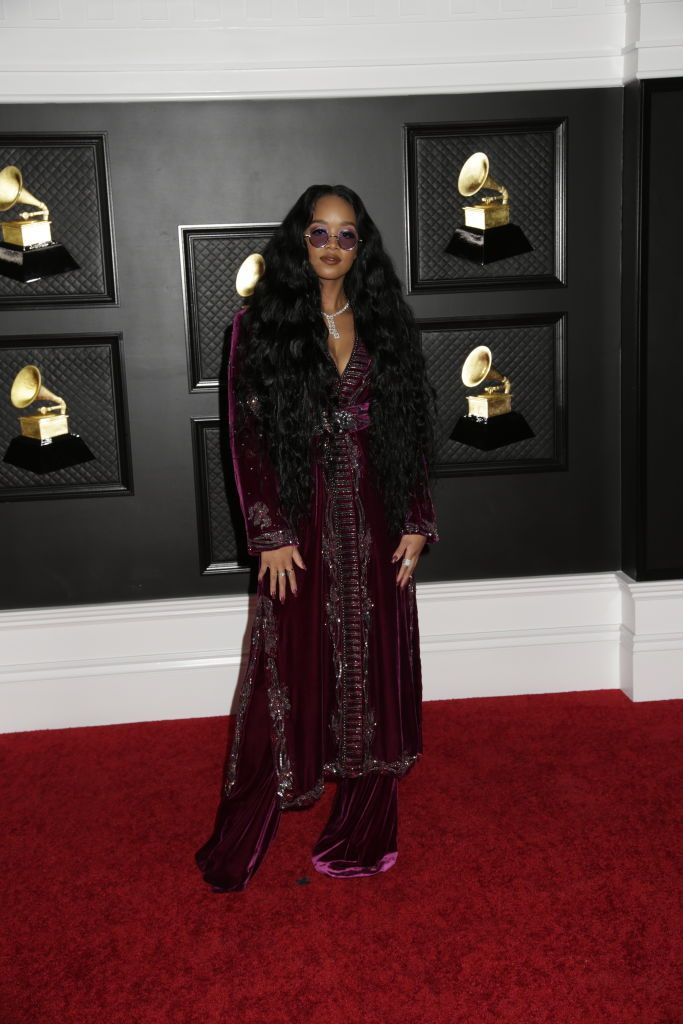 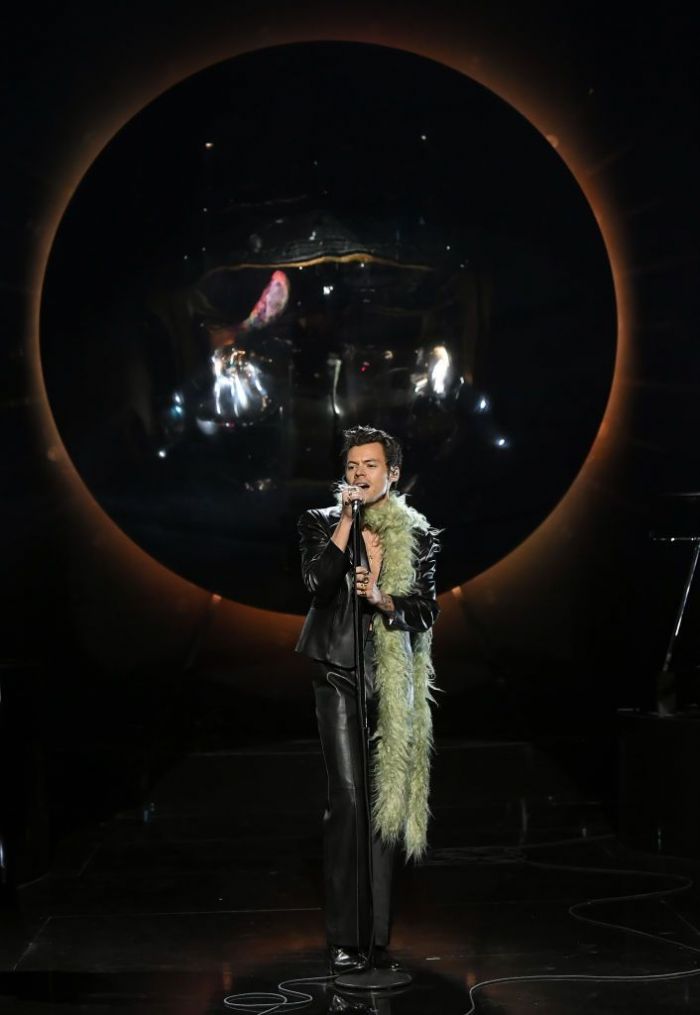 The Watermelon Sugar singer (and ‘Best Pop Solo Performance’ winner) kicked off the night fabulously in a sexy black leather Gucci suit with flared pants and an accompanying feather boa for the perfect rock-star touch. So, what did you think of the outfits from this year’s Grammys? Which of these would you like to have in your wardrobe?