As the name suggests, a plant-based diet is one that is made up of foods that come from plants, with little to no animal-based products. Now, this doesn’t mean eating like a rabbit. There’s actually a lot more to plant-based diets than lettuce and carrots. Plants encompass a variety of foods including vegetables, fruits, nuts, seeds, grains and legumes. And with the ever-growing food technology industry, these plant-based items have the ability to be transformed and upgraded to an array of versatile and delicious ingredients.

Take tofu for example, originating in China over 200 years ago, the simple soya bean had been used to make soya milk (yet another use). The milk had accidentally curdled, but by pressing it into a block – much like the way cheese is made – the liquids were discarded, and this became a staple ingredient to many Asian cuisines. Tempeh, a delicacy usually found in Indonesia, is a similar food, but made rather from fermented soybeans. Similar concepts have been applied to other plants such as peas or wheat. By soaking wheat dough in water, all the starch is removed, leaving high protein wheat gluten i.e. seitan.
Eating a plant-based diet comes with many health benefits. Consuming a variety of plant products ensures the intake of many natural nutrients and minerals that are often only found in certain plants. 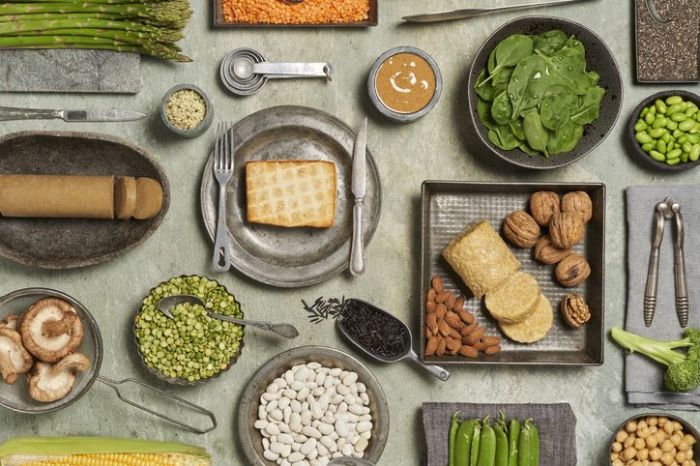 By exposing your gut to all of these wonders, it helps improve the ability to absorb the nutrients and can support your immune system and reduce inflammation. Plants tend to contain a lot of fiber, which is known to help lower cholesterol and improve good bowel movement. Research has shown that when compared with diets high in animal products, there is a link between plant-based diets and lower rates of heart disease, some cancers, and type 2 diabetes. Not only is it better for your health, a plant-based diet is also better for the environment. Specifically, plant-based meat emits 30-90% less greenhouse gases than conventional animal meat. If you then consider the amount of carbon emitted during the entire process of animal agriculture; from producing fertilizer for the feed crops all the way up to transporting the animals, a plant-based diet has a much smaller carbon footprint, thereby helping to mitigate climate change.