After an astounding year with Barcelona, on Monday 29th November, at the Ballon d’Or ceremony in Paris, the Spanish soccer player, Alexia Putellas won the Feminin award for the world’s best player in women’s soccer. She successfully outvoted both Jennifer Hermoso (Barcelona) and Sam Kerr (Chelsea), who came in second and third, respectively. This prestigious individual award signifies Putellas’ influence on the club’s performance during their 2020-21 season. For the first time in their history, Putellas led her team to win the UEFA Women’s Champions League and go on to complete a continental treble.

Having joined FC Barcelona in 2012, Putellas has since won five league titles, six Copas de la Reina, and one UEFA Women’s Champion League title. And in 52 games of the calendar year, she recorded 38 goals and 24 assists. The honor of this award marks the first time France Football has chosen a member of Barca’s women’s team. Putellas is only the second Spaniard and Barca player (after Luis Suárez) to win the award, and the first-ever Catalan winner (male or female). 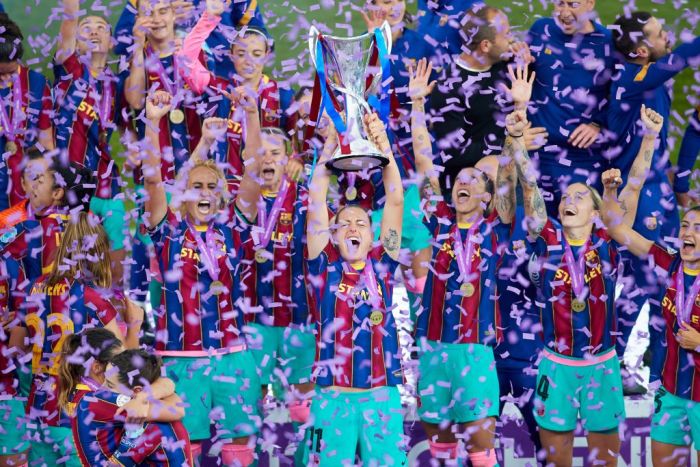 Putellas plays midfielder for the national team of Spain, and captains the Primera Division club Barcelona. She used to primarily play as a forward for a large part of her career, but in recent years has transitioned into the playmaking role she has today. As well as center-midfielder, she also has the ability to play as a second striker and an attacking midfielder, and even in defensive midfield if needed. After winning the award, Putellas gratuitously thanked her teammates, coaches, fans, and the club.

She also thanked her family and was particular to mention her father. Having passed away just two weeks before the start of the 2012 UEFA Women’s Under-19 Championship, Putellas will often look up and point to the sky when celebrating a goal, or stepping on to the pitch, as a dedication to her father. With her style of play described as creative and decisive, Putellas is widely regarded as one of the best players in the world.