The 2021 Roland Garros tournament comes to an end today. It was full of surprises, upsets, great matches, and overall amazing tennis. Yesterday, came to an end the women’s singles category. After the withdrawal of top seeds such as Ashleigh Barty, Naomi Osaka, and Simona Halep, tennis fans all over the world were curious to see who will claim the championship title. Barbora Krejcikova stunned everyone as she became a finalist alongside Anastasia Pavlyuchenkova, another unexpected finalist. To be clear, their success was a result of their remarkable abilities, achieving it on their own merit. 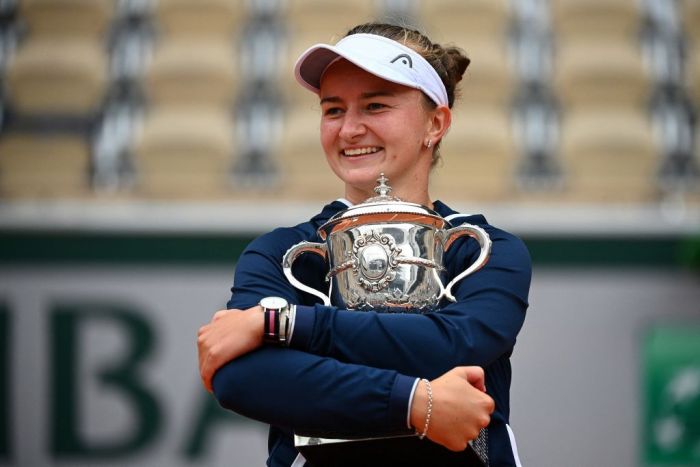 The Czech, who entered the tournament unseeded in the singles, defeated four seeded players to reach the final, including Coco Guff and Maria Sakkari. Although she was unseeded, it was Krejcikova who eventually took home the championship. Putting aside a shaky set, Krejcíková won her fifth major tournament as a singles player by beating 31st-seeded first-time finalist Anastasia Pavlyuchenkova 6-1, 2-6, 6-4, claiming the 2021 Suzanne-Lenglen cup. At the moment she won, Krejcíková blew kisses to the sky, her eyes squeezed shut, in a tribute to her former coach, Jana Novotna, the 1998 Wimbledon champion who died of cancer in 2017. “Pretty much her last words were just enjoy and just try to win a Grand Slam. I know somewhere she’s looking over me,” Krejcíková told the crowd at Court Philippe Chatrier. “She was such an inspiration for me. I just really miss her. I hope she’s happy right now,” she added. She is the third unseeded women’s champion in the last five years at Roland Garros.

However, this isn’t the only historic thing Krejcikova accomplished this year. On today’s (Sunday) afternoon, Krejcikova and Czech teammate Katerina Siniakova topped Poland’s Iga Swiatek and the United States’ Bethanie Mattek-Sands in straight sets 6-4, 6-2 to win the French Open doubles title. With this victory, Krejcikova becomes the first woman since Mary Pierce in 2000 to win the French Open singles and doubles titles in the same year. “These past two days have been unbelievable,” Krejcíková said after the doubles victory on Sunday. “I just want to thank everyone today for coming and supporting us.” We cannot wait to see what’s next for this gifted athlete and are already eager for the next tournament.