Although there have been multiple award ceremonies this year already – no one knew what to expect out of this year’s Oscars. With the promise of a more intimate ceremony set in Los Angeles’ Union Station, the need for social distancing, and the rather uneven style efforts throughout this locked-down awards season, the anticipation was high. However, to our (pleasant) surprise, the stars in attendance didn’t disappoint and came out in glamorous and unforgettable looks. So, without further ado, here are some of the best looks from this year’s Academy Awards. 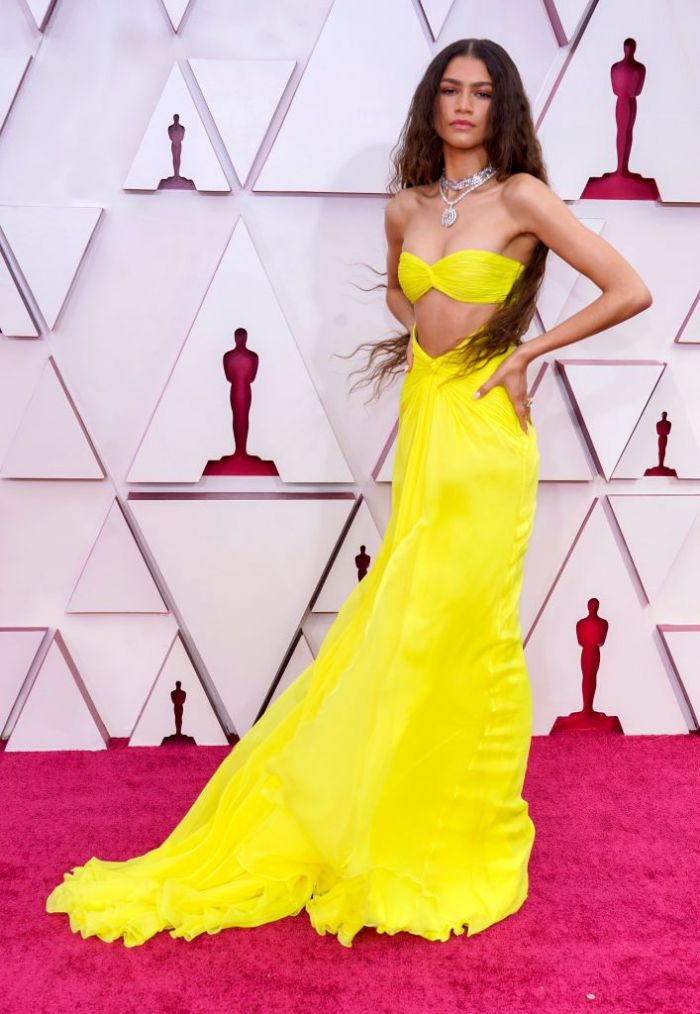 Zendaya further established herself as a red carpet force with her look at this year’s Academy Awards. The actress wore a strapless vibrant lemon yellow Valentino Haute Couture gown, which featured a cutout detail that revealed her midriff. The Best Original Score presenter drew inspiration for her look from Cher, which she paired with over 183.3 carats worth of Bulgari diamonds and Jimmy Choo pumps. Valentino said on Instagram that the chiffon dress was custom designed by its creative director, Pierpaolo Piccioli, and took artisans 300 hours to produce. The Italian label also revealed that the gown has its own name: Force de beauté. 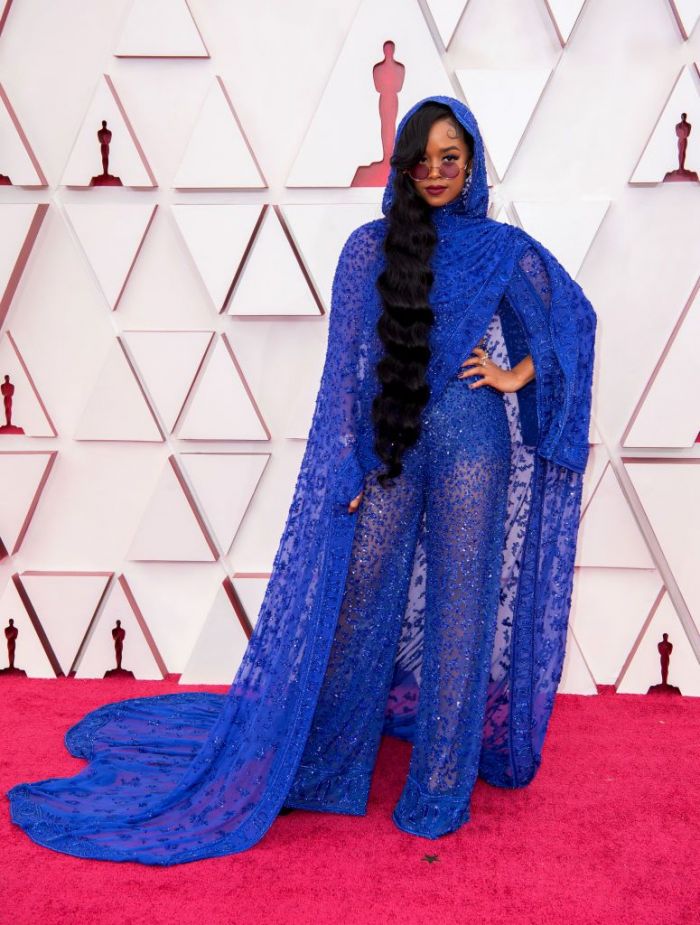 Singer and first-time Academy Award winner, H.E.R., stunned on last night’s red carpet in a blue ensemble that was inspired by the late icon Prince. The Best Original Song winner wore a custom hooded creation by Dundas that had a flowing cape and sparkled from head to toe. H.E.R’s semi-sheer jumpsuit featured wide-leg pants and was covered with the lyrics of her nominated song from Judas and the Black Messiah, Fight For You. Designer Peter Dundas told InStyle that H.E.R.’s look was inspired by the outfit Prince wore to the 1985 Academy Awards, where he won best original score for Purple Rain. 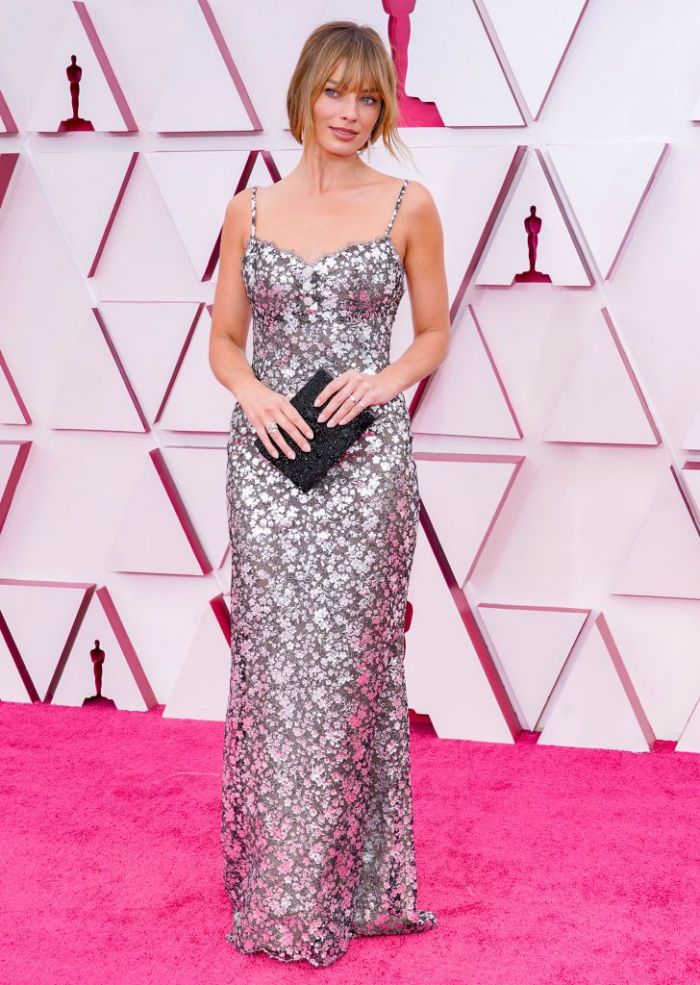 Margot Robbie channeled retro-chic glamour in a timeless gown at this year’s Oscars. The actress and Chanel ambassador tapped Chanel’s fall ’19 collection in a 2000s-chic spaghetti strap gown. The full-length number featured a metallic floral print with a bustier-inspired neckline and a dipping back silhouette. Robbie completed her look by wearing her hair in a low ponytail and debuted blunt bangs. Robbie accessorized with a glittering black clutch and subtle jewelry. 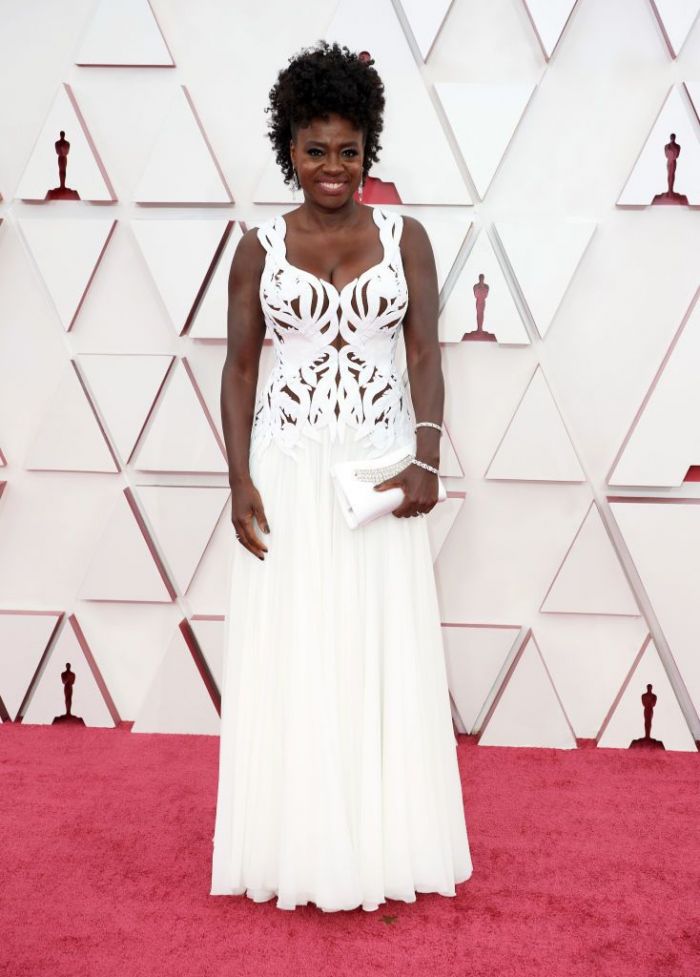 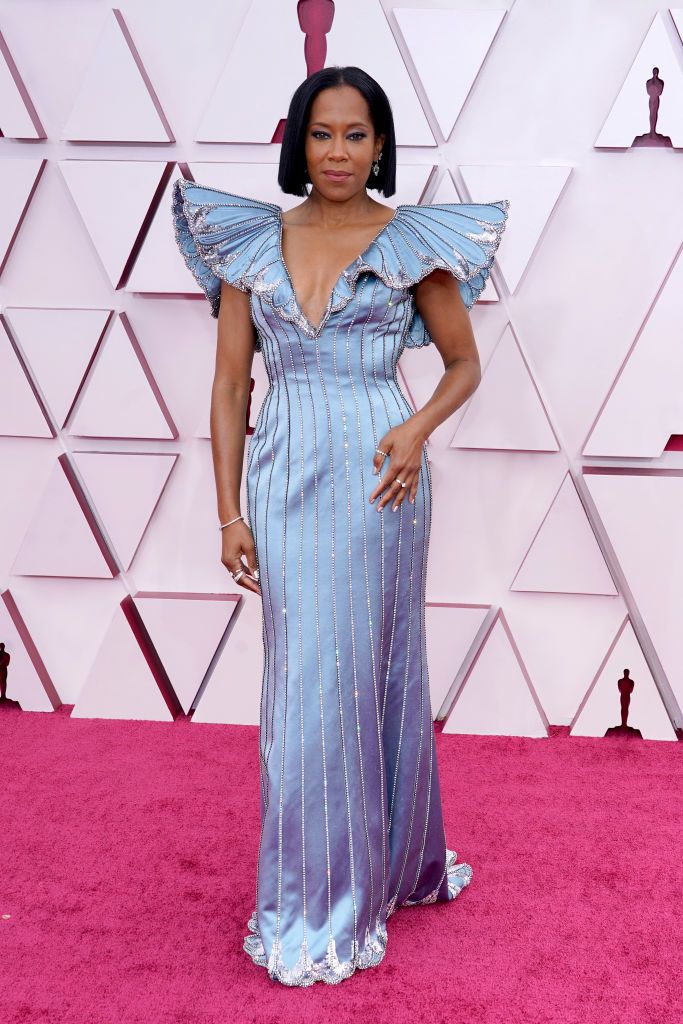 Regina King attended this year’s ceremony wearing a pale blue duchess satin flared Louis Vuitton gown, which featured ruffled shoulders and gradation of silver sequins. Crafted over the course of 140 hours in the Vuitton atelier, the piece features a record-breaking number of Swarovski crystals for the house. With 62,000 sequins, 3,900 pale sparkling stones, 4,500 in darker tones, and 80 meters of chain stitching, the look is a museum-worthy fashion spectacle. 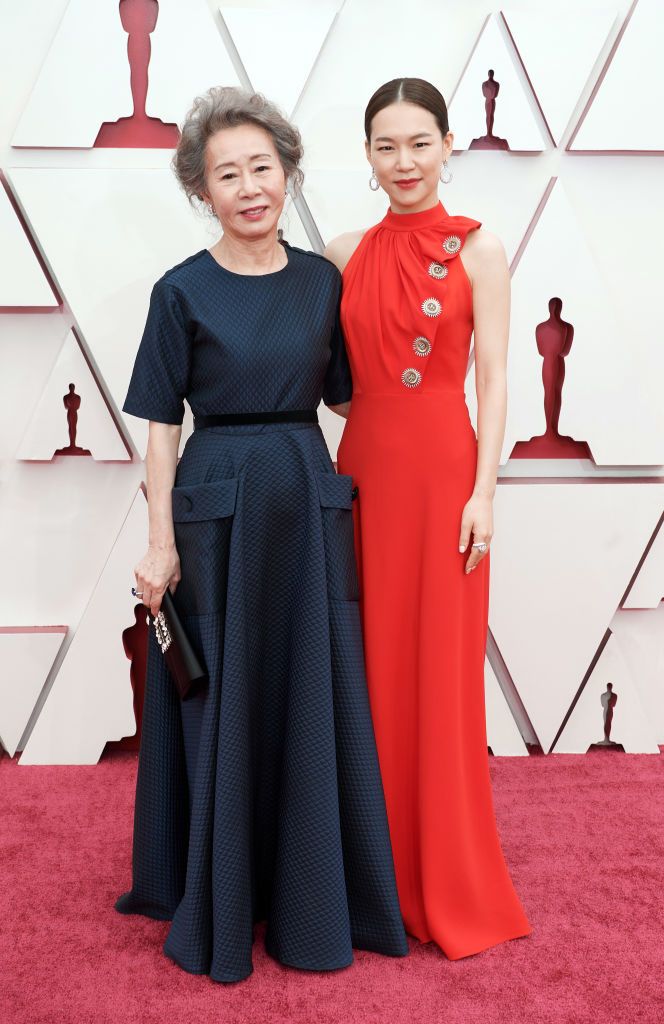 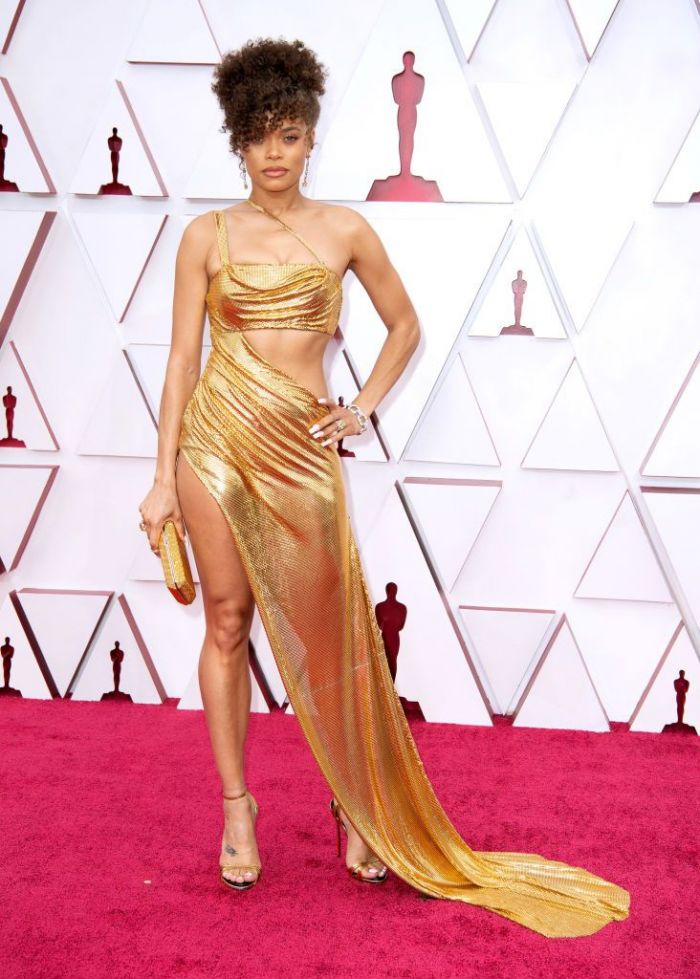 Best Actress nominee Andra Day arrived at the ceremony wearing a metallic gold custom Vera Wang Haute Couture cutout gown with a next-level slit that left her entire right leg exposed. She wore her hair in a high bun and accessorized with $2 million in Tiffany & Co. jewels – gold dangling earrings, a jewel-encrusted chain-link bracelet, and a series of glittering rings. Day completed her look with a gold clutch and Casadei heels.