After 18 months of delays and setbacks, the world premiere of No Time To Die finally took place in London on Tuesday night at the Royal Albert Hall. This is the 25th installment in the James Bond film franchise, and, after five movies, marks the last one for actor Daniel Craig as the British Secret Service agent. Many stars attended the premiere, starting from Craig and his co-stars to royal guests in the form of the Duke and Duchess of Cambridge. So, without further ado, here are some of our favorite looks from the long-awaited premiere: 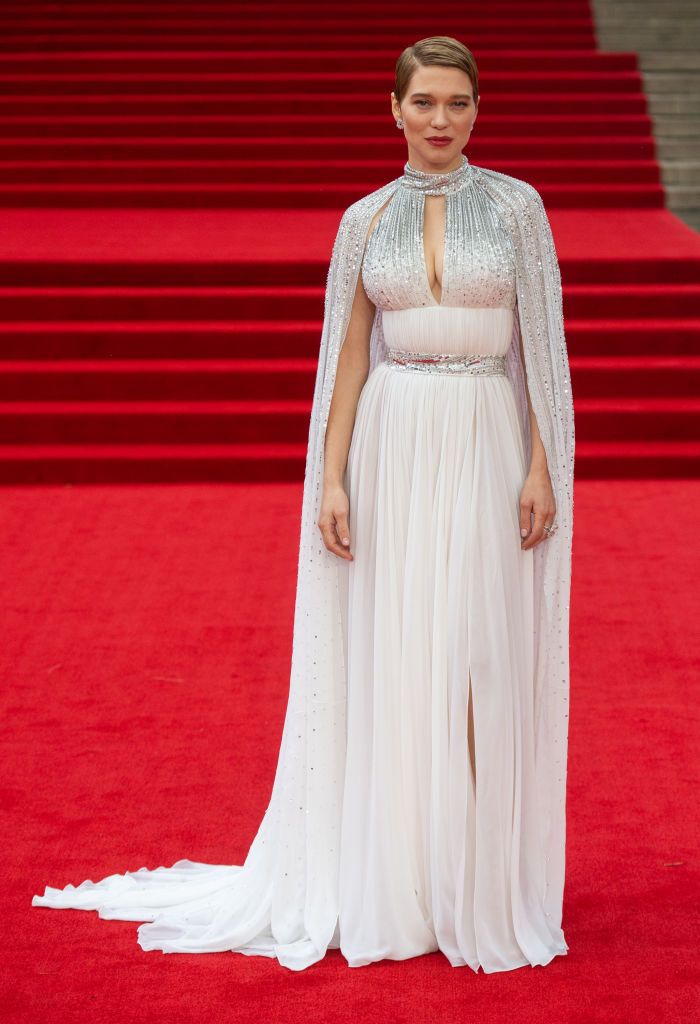 Léa Seydoux certainly turned heads as she made a show-stopping arrival at the No Time To Die premiere. The French actress, who reprised her role as Dr. Madeleine Swann, wore a custom Louis Vuitton gown designed by Nicolas Ghesquière. The dress featured a crystal- and silver paillette-embroidered detailing, a keyhole neckline, and a chiffon cape. Seydoux completed the look with Chopard jewelry. 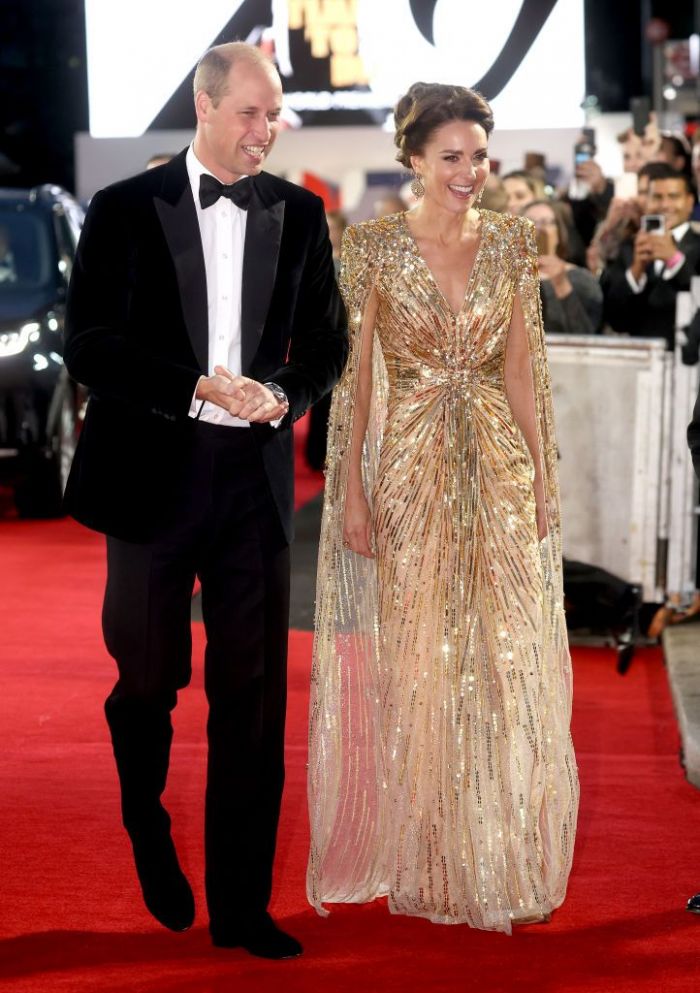 Per usual, Kate Middleton, Duchess of Cambridge, made an unforgettable appearance at the U.K. premiere’s red carpet. The Duchess stepped out to the red carpet wearing a dazzling Jenny Packham gold-sequined cape gown, which featured sheer panels and gold sequin detailing. Middleton wore her hair styled in an elegant updo and accessorized with matching circular gold earrings by O’nitaa. Middleton completed the look with nude Aquaruzza heels. Many believed that this look was inspired by the Duchess’ late mother-in-law, Princess Diana, who wore a shimmering silver gown with similar shaping to the 1985 premiere of another Bond flick, A View to a Kill. Middleton was joined at the premiere by her husband, Prince William, who wore a traditional black, velvet tuxedo. 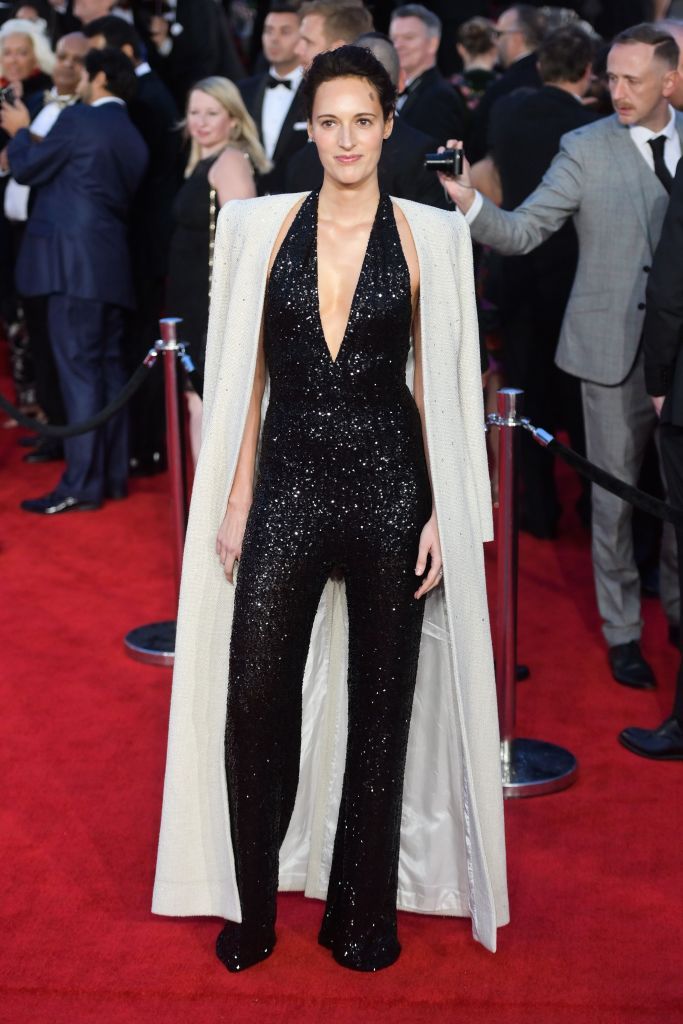 Phoebe Waller-Bridge made a stylish arrival on the red carpet. Waller-Bridge, who is one of the four screenwriters for the blockbuster, wore a jumpsuit and jacket combo from Azzaro Fall 2021 Haute Couture collection. The combo consisted of a glittering embellished black jumpsuit, which featured plunging neckline and halterneck detailing, and a chic cream coat. The actress and writer completed her look with jewelry by Jessica McCormack. 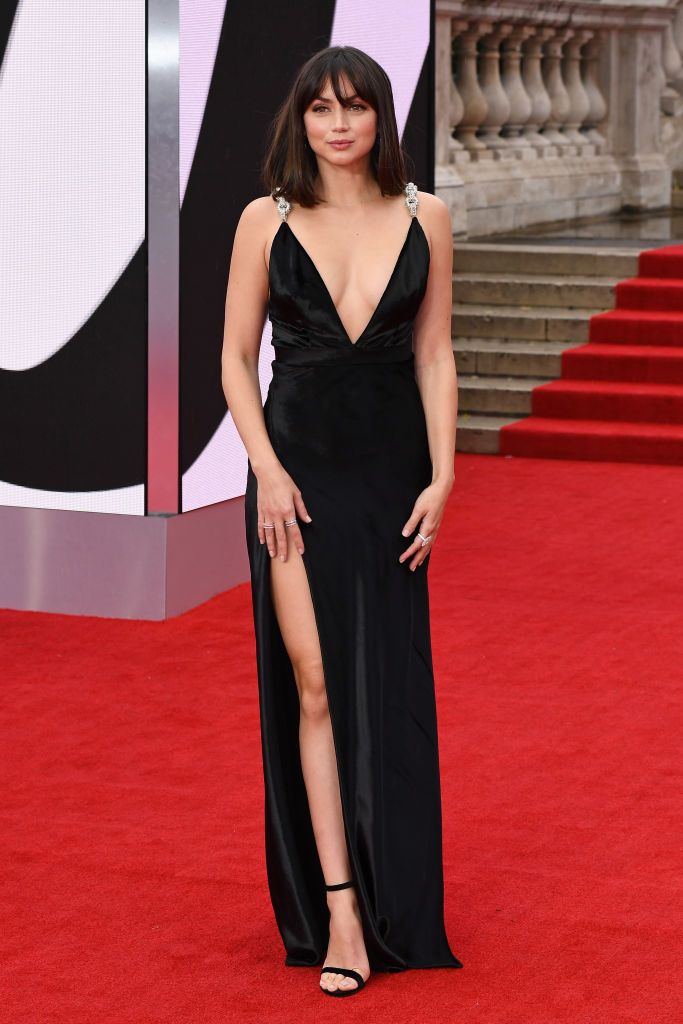 New bond girl, Ana de Armas, brought Hollywood glamour to Tuesday’s red carpet. The actress wore an edgy black gown from Louis Vuitton, which featured a plunging neckline, a thigh-high slit, and two chunky glimmering chain-link dress straps. Armas finished her look with Chopard jewelry and a pair of black heeled sandals with an ankle strap. The actress seemed to have nodded to the simple black gown she wears in the film as well as a silky gown worn by Barbara Bach in a different Bond film, The Spy Who Loved Me. 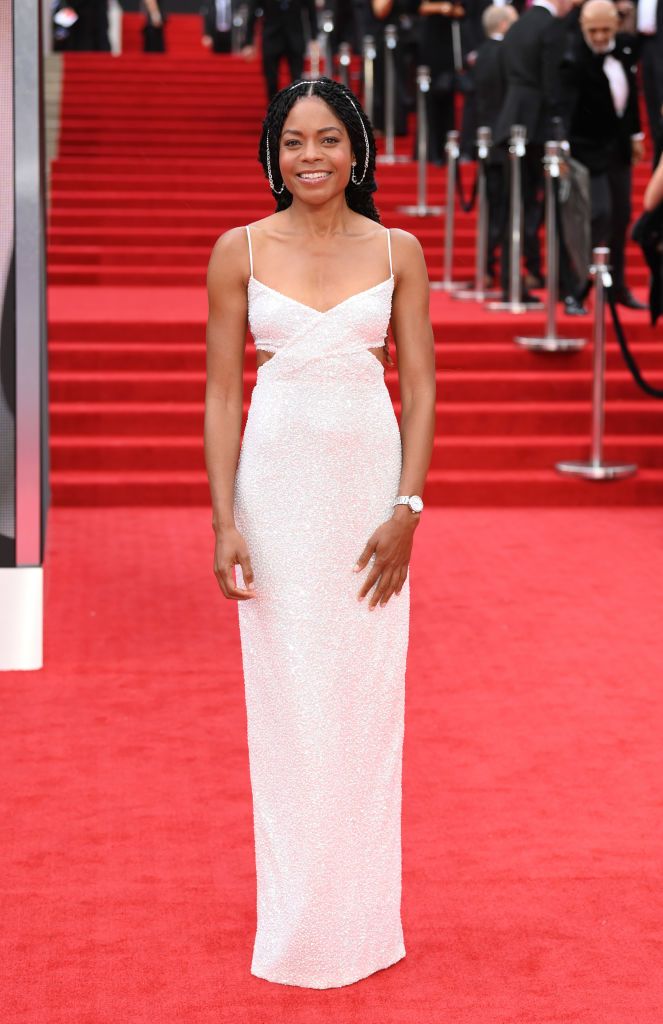 Naomie Harris, who reprises her role as Miss Moneypenny in the upcoming film, looked stunning when she stepped onto the red carpet. The Oscar-nominated actress wore a custom white sequinned gown from Michael Kors Collection. Her breathtaking dress is a variation of one from the Spring 2022 collection, shown on the catwalk earlier this month. Harris completed her look with the Ana Khouri diamond and emerald Eva headpiece, an omega watch, and Jimmy Choo ‘Metz’ heels. 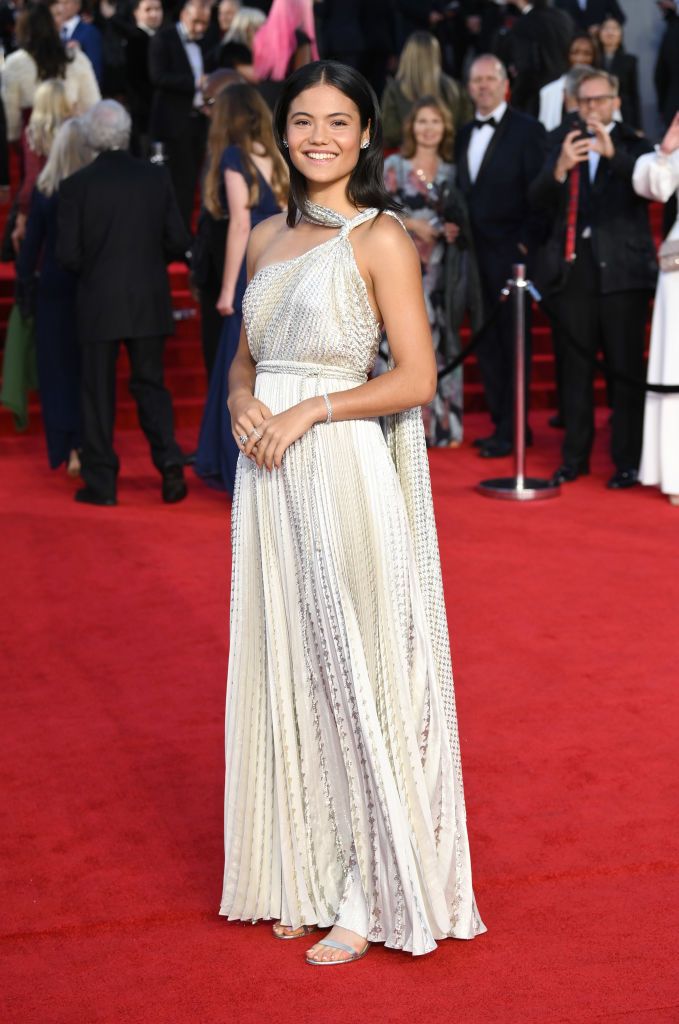 Emma Raducanu looked ethereal on the red carpet. The 2021 U.S. Open champion was the picture of elegance in a dazzling silver gown from Dior’s Resort 2022 collection. The asymmetrical number featured a neck strap along with a coordinating string belt. As a newly announced Tiffany & Co. ambassador, Raducanu was accessorized with jewelry from the brand. Raducanu completed her look with Stuart Weitzman heels. 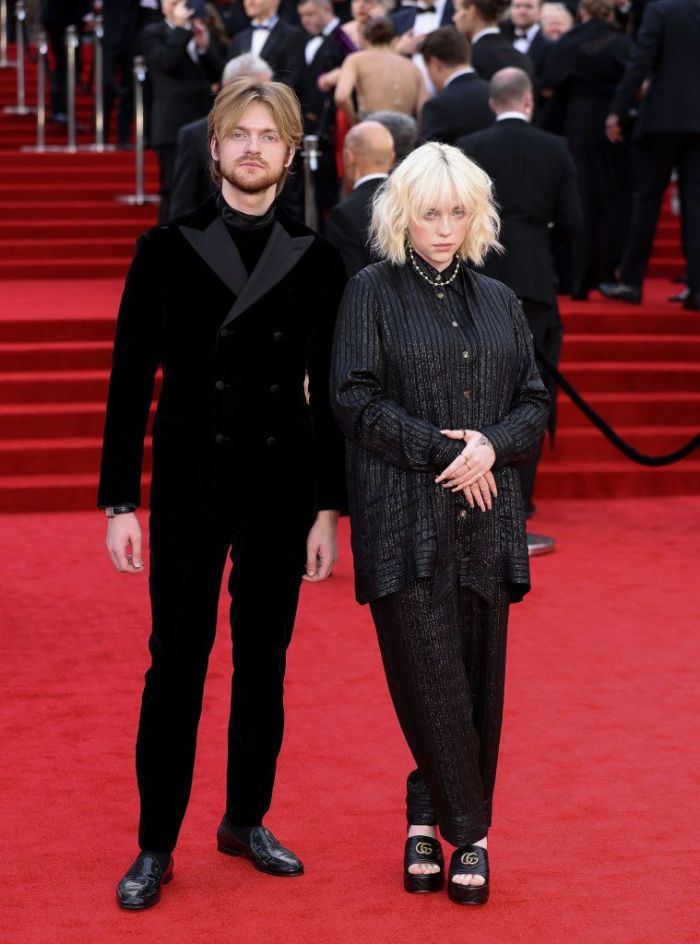 Billie Eilish, who sings the theme song for No time To Die, looked stunning as she graced the red carpet. Eilish wore a glittery shirt with gold buttons and matching pants by Gucci. The singer completed the look with a pair of chunky platform sandals, also by Gucci. Eilish accessorized her look with a stack of rings, bee-shaped earrings, and a gold necklace. Eilish walked the carpet with her brother Finneas, who wore a black velvet Giorgio Armani tuxedo and a Cartier watch. 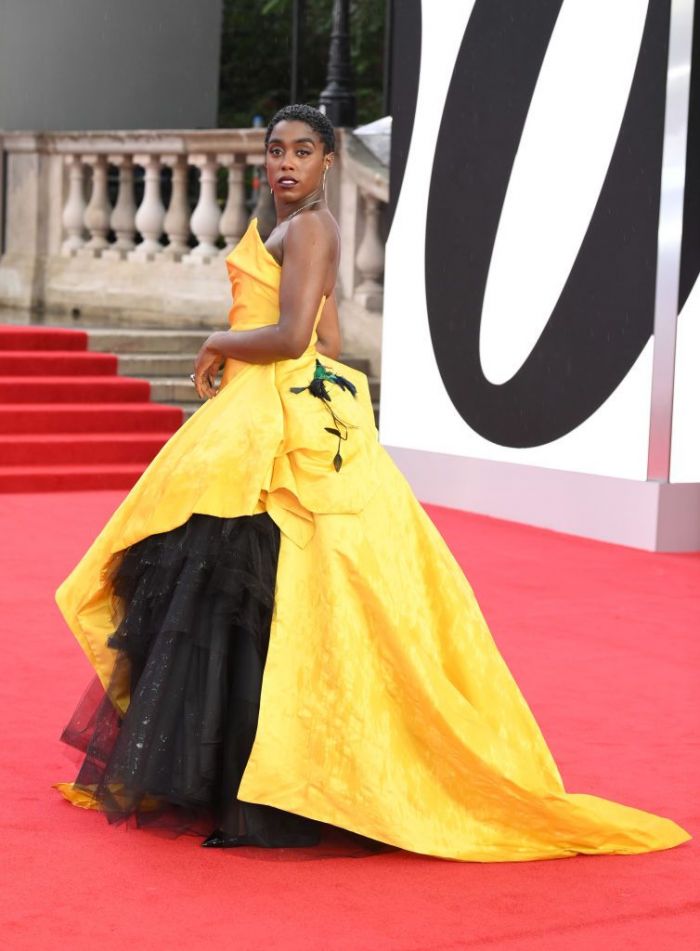 Lashana Lynch, who plays the first Black female 007, wore a dramatic custom yellow Vivienne Westwood couture gown. The actor paid homage to her Jamaican roots with the dress, which featured the Doctor Bird, a type of hummingbird, on the back. Lashana accessorized her look with a mixture of jewelry by Ara Vartanian, Shaun Leane, and Jessica McCormack. 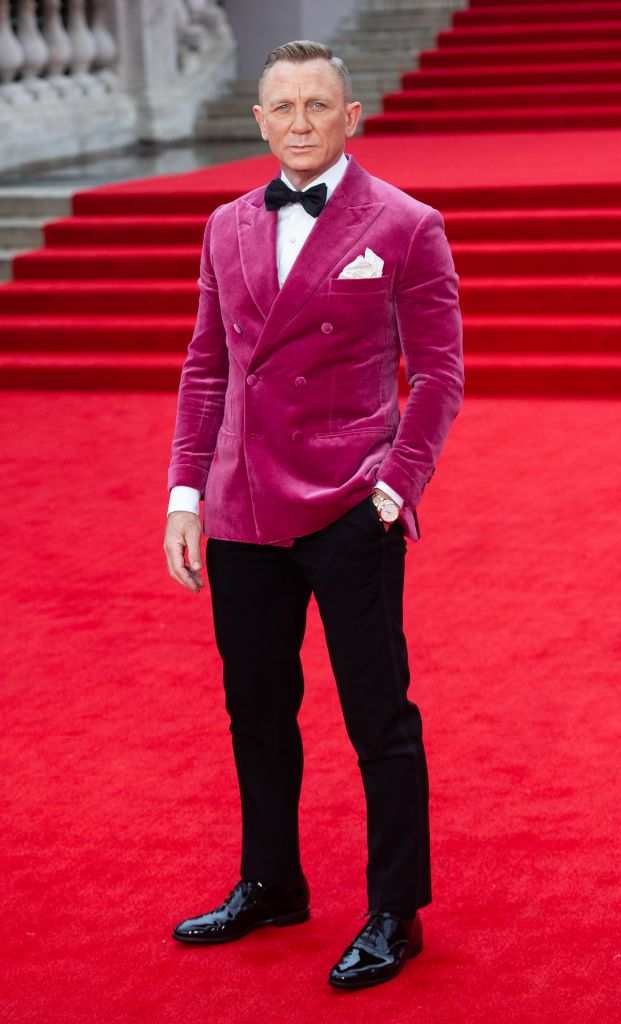 How could we make a best-dressed list for the No Time To Die premiere without including Bond himself, Daniel Craig? For his last carpet appearance as James Bond, Craig wore a double-breasted, deep fuchsia pink velvet tuxedo by Anderson and Shepherd. The actor paired the jacket with black pants by Henry Poole. To complete the look, Craig sported shining black John Lobb shoes and an Omega watch.