Gigi Hadid Pulls Down a Trespasser at Chanel Show

During the Chanel finale at the Grand Palais in Paris on Tuesday, a woman channeling her inner supermodel jumped onto the runway and tried to walk with the other models. However, the woman’s runway walk didn’t last long, as model Gigi Hadid quickly removed her from the catwalk.

WWD has identified the woman as the YouTuber and comedian Marie S’Infiltre. S’Infiltre climbed onto the runway wearing a Chanel-style houndstooth patterned outfit and a black hat.

The YouTube star has over 227,000 subscribers on her channel and over 214,000 followers on Instagram. This isn’t the first time S’Infiltre has done such a thing, as WWD reports she also crashed the runway at Etam’s show earlier in the week.

Here is footage of what went down:

Gigi surely knows how to deal with a party crasher ???? There was a bizarre incident today at Chanel, where a woman jumped on the runway during the finale, inserting herself among the lineup of models. Swipe up to see how Gigi handles it, and tap the link in bio for the full story. ????: @jdiderich; ????: @shutterstocknow . . . . #wwdnews #wwdfashion #chanel #gigihadid #pfw

S’Infiltre made her way down most of the long runway before facing an unexpected obstacle – model Gigi Hadid.

The supermodel can be seen blocking the YouTuber and leading her off the runway. When caught, S’Infiltre posed spontaneously, putting her hands on her hips. Hadid looked unimpressed by the comedian and put an end to her antics. 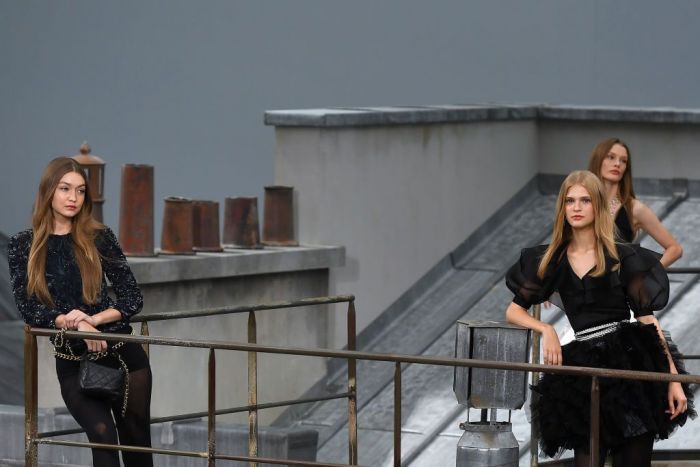 This isn’t the first time Hadid faced off strangers at Fashion Week. During the Milan Fashion Week last year, a man named Vitalii Sediuk, an internet prankster, grabbed her around the waist and picked her up as she left the Max Mara show. The amazing Hadid struck the man around the face with her elbow before chasing him down the street.

So, although it was S’Infiltre who was trying to get attention for the stunt, Hadid was the one who started receiving praise online and began trending on Twitter, according to BBC. May I add, rightfully so. Well done, Ms. Hadid!