It’s been over two decades since Emma Watson reached our screens when she played Hermione Granger in the Harry Potter movie franchise. Whether we’ve grown up with her or watched her grow up, the fans simply love her. Movies aside, Watson also graduated from Brown University with a Bachelor’s degree in English Literature and is known to be an activist, advocating for gender equality. To top it all off, she has impeccable fashion sense and has been described as ‘an early adopter of sustainable fashion.

If you want to try and adopt Emma Watson’s chic look, all you need to do is follow these simple tips and you’ll transform your style into something subtly magical. Let’s start off with her makeup, Waston loves to wear red lipstick and full eyebrows. She usually goes with an orange-red hue but will go for nude when she’s dressing down. A fan of the natural look, Watson doesn’t tan but prefers her more natural pale skin tone. She also goes with brown and black hues to subtly play up her eyes. As for her hair, Watson has been known to favor an updo. This will be neater for more formal events, but slightly tousled when she’s going casual. She also likes to wear headbands, often coupled with messy side braids. All of these are usually topped off nicely with drop earrings to match the style, sometimes even just a single one instead of a set. 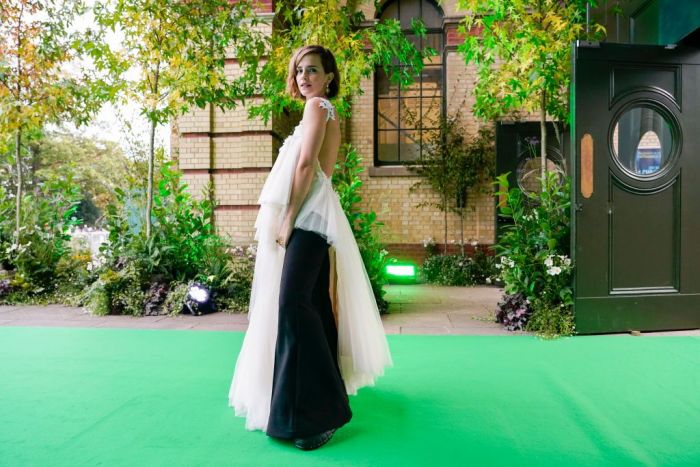 Watson has blown us away with some of her incredible floor-length gowns, but she also has a few fashion tricks for everyday wear. The leather jacket has been a standard that we’ve seen in her outfits, paired with anything from maxi dresses to mini skirts. She’s also a big fan of layering a simple white t-shirt to tone down a fancy design. A big fan of white tops with black bottoms, Watson seamlessly pulls off wearing pants under dresses. And finally, we have the tailored suit. Watson likes to mix it up from traditional black and white and likes to wear patterns as well.