The Big Winners At Wimbledon 2021

The 2021 Wimbledon tournament came to an end today after two weeks of extraordinary tennis. After a one-year hiatus, the world’s top players returned to the All England Club in London in all force. It was an intense, entertaining, and slippery tournament, among other things. And, it was the end of some years-long traditions at the beloved tournament. This was the last year in which the traditional rest day on middle Sunday took place and the last time in which The Duke of Kent served as the president of the All England Lawn Tennis and Croquet Club (AELTC) after more than 50 years. So, without further ado, her is what went done in this years’ finals. 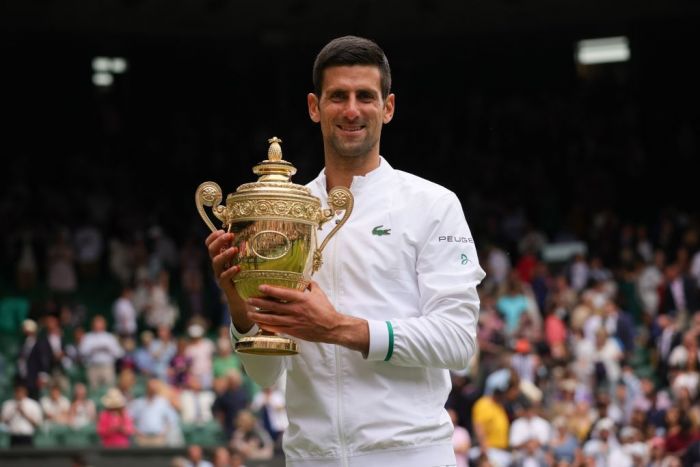 2019’s defending champion, Novak Djokovic, managed to hold on to his title, claiming the title for the sixth time at the All England Club. With his 6-7 (7-4), 6-4, 6-4, 6-3 victory over Matteo Berrettini, Djokovic claimed his 20th Grand Slam title to equal the men’s record shared by his ‘Big Three’ rivals – Roger Federer and Rafael Nadal. The Serbian player now has a 21-match win streak at Wimbledon. This win keeps Djokovic’s victory keeps intact his goal of making history in men’s tennis by winning a Golden Slam (winning all four majors and Olympic singles gold in the same year.) Now, the No.1 player only lacks the Olympic gold medal and the U.S. Open title to achieve this milestone. If Djokovic, who expressed doubts about going to the Tokyo Games, will indeed sit out on the Olympics, he could also join an elite list of tennis players by achieving a calendar Slam, which only five other players achieved throughout history.

“Winning Wimbledon was always the biggest dream of mine as a kid,” Djokovic told the Centre Court crowd after his win. “I was a seven-year-old boy in Serbia, constructing Wimbledon tennis trophies from improvised materials that I could find in my room. And today, standing with a sixth Wimbledon [title], it’s incredible, amazing.” Djokovic also spoke about his ‘Big Three’ rivals, saying: “I have to pay tribute to Rafa and Roger. They are legends of our sport and they are the two most important players that I ever faced in my career. They are the reason that I am where I am today. They helped me to realize what I need to do to improve.”

The women’s singles final took place on Saturday between Ashleigh Barty and Karolína Plíšková. After a three-set match, Ashleigh Barty clinched her first Wimbledon title and second Grand Slam title overall. For the first time since 1977, both women were making their debut appearance in a Wimbledon final. The world No. 1 raced through the first set but lost the second in a thrilling tie-break before recovering her composure to win the decider. Barty is the first Australian woman to win the singles title since her idol Evonne Goolagong Cawley won it in 1980. “I have to genuinely thank every single person in this stadium. You have made my dream so special, thank you so much,” Barty said during her on-court interview. “It was an exceptional match right from the start, I knew I had to bring my very best level. I was really proud of myself with the way I was able to reset and just keep going.” 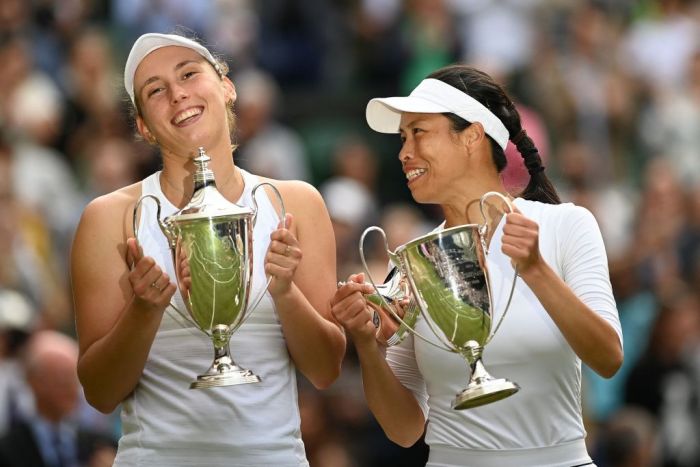 Hsieh Su-Wei of Taiwan won her third Wimbledon title in women’s doubles after partnering with Elise Mertens of Belgium to beat Russian duo Veronika Kudermetova and Elena Vesnina in a thrilling three-set match. Hsieh and Mertens saved two match points in the second set and won 3-6, 7-5, 9-7. They clinched a back-and-forth third set when Hsieh hit a backhand winner to break Vesnina’s serve. The Russian duo had two match points at 5-4 in the second set and also served for the match at 7-6 in the third. Mertens also had a chance to serve out the match at 5-3 in the third. Hsieh also won the French Open doubles in 2014. It was Mertens’s third Grand Slam doubles title and first at Wimbledon.